I am a pastor, not a professional historian. I am however an amateur historian, and have written history for publication, so I know a bit about how you do history. Sadly the discipline of Church history is either ignored or misunderstood by many evangelicals today. Historical ignorance is corrected by the injunction to "go and read a book", but there are those who know something about history, but do not understand how history is done 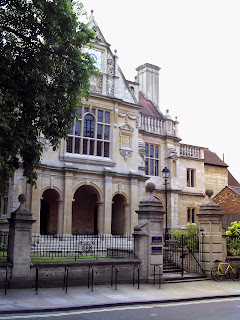 That was one of the worst things about the White-Pinto debate last week, that Chris Pinto demonstrated a thoroughly false historiography that is too common in certain circles. The word historiography in this context refers to the study of how we "do" history, and Pinto displays the view that certain historians of the 19th century form a "canon" (small 'c', note), a rule by which all other historians are to be judged. This isn't an uncommon view in certain circles, as witness the fact that there are still people who hold to the "trail of blood" view of Baptist history. Now of course when young Christians set out reading history, they will tend to go with the older writers, those of a viewpoint they themselves hold, and there is nothing wrong with that; a biography by a sympathetic author is always a far better read than a biography by an unsympathetic one, after all, and a history written by an atheistic Marxist intent on imposing his ideas of how things ought to have happened upon the record is going to be a pretty irritating read unless you are an atheistic Marxist (and even then...). But we must beware taking those favourite authors and saying, "If anyone disagrees with them, then so much the worse for the one disagreeing." As Christians who believe in the reality and objectivity of truth, our first commitment must be to that same truth, to what really happened, as opposed to what we would like to have happened. I don't just refer to the interpretation of history, what certain events mean, what motives lay behind a person's action, for example, but the actual historical record itself, who did what and when.

When we go any distance into the past beyond about a hundred years, our knowledge of history is based upon records, sources. As the knowledge of sources changes, so too our knowledge of the past does; to give one example, open a 19th century biography of John Knox such as Thomas M'Crie's famous work and it will tell you that Knox was born in 1505. More recent works, including the biography by Henry Cowan published in 1905, give the date as between 1513 and 1515, up to a whole decade later. Why is this? Because between M'Crie's writing in 1811 and Cowan in 1905 further research had been done on Knox, following M'Crie's lead. No historian is to be regarded ipso facto as having given the last word on a subject. Cowan notes that the traditional date of Knox's birth rested almost entirely upon a historian writing about 50 years later, in other words on a secondary source, while the later date is based upon Theodore Beza, who knew Knox personally, and other contemporary sources. Now M'Crie's work is a classic, and yet it is wrong on the date of Knox's birth because later historians were able to uncover data unknown to M'Crie. That is how history works, being based upon sources, the judgement of historians is liable to alteration if new sources come to light. There are also people who create fraudulent sources, which creates all sorts of havoc for historians. In E.C. Pike The Story of the Anabaptists (London, 1904) he refers to Goadby's Byepaths of  Baptist History and its reference to the graveyard at Hill Cliffe Baptist chapel, near Warrington, mentioning a gravestone dated 1357. It is quite certain that the stone in question had been fraudulently altered, firstly because its style was not 14th century, and secondly because old records exist that show what the original date on the stone was. In the effort to claim the name of "oldest" people have stretched points and flat out made things up. The temptation to exaggerate can be strong.

This being so, to claim that any historians, however orthodox their theology, are the canon by which all others are to be judged is just a demonstration of appalling ignorance of how history works. The great 19th century Church historians are not honoured by being treated as the be all and end all of history, as the men who gave us the infallible facts and interpretation, but by our following in their footsteps, taking up the trails that they blazed, developing the country they explored, exploring still further. Just because a particular interpretation of history is seen as favouring a particular theological position does not mean that, should the evidence force us to that conclusion, it may not have to be abandoned, as for example the claim that the Cathars and Paulicians were in any meaningful sense "reformers before the Reformation". Nor should we read back the excesses of the late Middle Ages into the age of Anselm, far less the age of Augustine. The historian must go where the evidence leads, not cling to Hill Cliffe as pre-Reformation when all the evidence shows it is of 17th century origin.

And the reader must recall that history is not an exact science; the reconstruction of what happened in the past is often straightforward, but sometimes it is not. In days past people were not so exact at keeping records as we are today, the exact date of an event was not seen as important in the way we see it - the event itself was what mattered. Historians of the past were men like us, capable of error, of being misled or of drawing false conclusions; that J.A. Wylie's estimate of the Cathars was in error does not mean that we should cast out everything he ever wrote, far less that we should all become Roman Catholics or something like that. But we should remember this: those writers were not infallible, and their writings are not inspired. And for us to treat them as such would be to do them a great disservice, for it would be to treat Protestant historians as though they were, in the field of history, infallible popes.
Posted by Highland Host at 10:12 PM