Christians ought to tell the Truth! (updated)

We, as Christians, follow Him who is the Truth. As such, we ought to be truthful. It is therefore profoundly disappointing to read this. Not overly surprising, but definitely disappointing. Liberty University has not "exonerated" Ergun Caner. If he was innocent of all wrongdoing, then he would have been retained in post as president and dean of the seminary. These are not merely honourary posts, at least if Liberty functions like a secular University. The deanship is no sinecure, the dean has many responsibilities. The president functions as the public face of the seminary. For Ergun Caner to have been removed from the deanship and presidency is a real demotion, and indicates that the Seminary leadership are in fact convinced that there was real wrongdoing on Ergun Caner's part.

So for the SBC Today blog to say: "This matter is behind us and we praise God that Dr. Caner is exonerated as he is retained at Liberty on faculty." is simply delusional, a failure to face facts. Men are not demoted wen they are found to be without guilt! We can all be glad that there have in fact been real consequences for Ergun Caner as a result of his falsehoods. What we all look for now is a statement from Caner apologising for what he actually did wrong.

As far as I am aware, the issue in Christian circles has never been that Caner was never a Muslim, it is that he claimed an expertise in Islam that he never possessed. It seems that the SBC today blog has forgotten this, and read only the words, "The committee found no evidence to suggest that Dr. Caner was not a Muslim who converted to Christianity as a teenager," without going on to read that he was nevertheless found to have uttered factually incorrect statements about his past. It is therefore less than completely honest to act as if the only real charge was that brought by certain Muslins, that Ergun Caner was a "fake ex-Muslim."

What is at issue, though, is whether or not he was ever a devout Muslim, whose father was a scholar. Many people bought Unveiling Islam because it was written by an ex-Muslim, a former insider with knowledge not available to those outside of Islam. I was one of them. If the book had merely been marketed as written by two Evangelical scholars of Turkish origins, I would not have bought that book. And herein lies another point - Ergun Caner has profited from his deception. His demotion will have brought with it a cut in salary. Unless Liberty is engaging in extremely dishonest behaviour (and there is no indication that they are), Caner will suffer financially.

Now, will he please put an end to this whole saga and make a public statement of repentance for the wrongdoing that led to his demotion? A pattern of embellishment has been recorded, and that pattern can only be denied by shutting one's eyes to reality.

Addendum:
Like Ergun Caner, I was converted out of a false religious system - liberalism. But most of my in-depth knowledge of liberalism comes from after my conversion. Why? Because I was a liberal in the pew, not a serious student of liberal theology. I freely admit this. Yet I attended a liberal Anglican church until 1998, and was confirmed in that tradition, with Bishop Montefiore's Confirmation Notebook, a volume that I have jokingly said teaches its readers how to say the Apostles' Creed without meaning a word of it. There is no evidence that Dr. Caner's knowledge of Islam was any greater than my knowledge of liberal theology was at conversion. I am no expert on liberalism. I was converted at 18, he was converted at 15 or 16 (I can understand that he might be a little hazy about the date, I was until I checked up on some immovable date-markers in 1998).
Posted by Highland Host at 2:45 PM No comments:

Posted by Highland Host at 9:14 AM No comments: 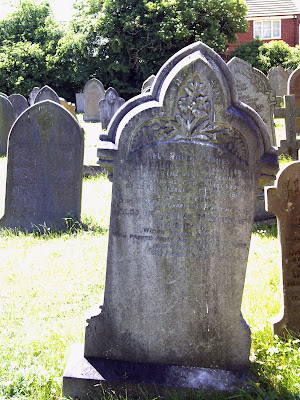 In the old Primitive Methodist graveyard at Saughall, on the Cheshire side of the English-Welsh border, there is the grave of the Rev. Robert Jones, a Primitive Methodist minister. The picture of it was taken yesterday. The inscription is most interesting. It reads:
"Rev. Robert Jones: He was called to the joy and service of the higher life while preaching in the Primitive Methodist Church, West Bromwich, on Sunday morning June 8th 1902, aged 52 years. 'I have finished the work Thou gavest me to do.'"
This is one of the things that ensures that the service is cut short!
Posted by Highland Host at 1:35 PM No comments:

Every so often someone finds (or finds that someone else has found) that there are other documents known as 'gospels.' Immediately they conclude that this somehow proves that Jesus was not the way the New Testament says He was. So what shouls Christians think of these things?

Christians should not worry about these discoveries at all, because they affect absolutely nothing. Contrary to all the hype, they have no affect at all on our understanding of who Jesus is. At best they help scholars to understand the heretical sects that produced them.

So why is there so much fuss about them? First of all, people talk about them because they can be used by unbelievers to undermine confidence in the Bible. A classic case in point is The Da Vinci Code’s claim that there were “more than 80” gospels considered for inclusion in the New Testament. This is utter nonsense. At no point was there ever a meeting that decided which books belong in the New Testament. But to say that the early Christians held various radically different views of Jesus means that we can pick and choose which Jesus we want to believe in ourselves. It is a way of avoiding Jesus’ claims.

Second, people love a good conspiracy theory. This is why The Da Vinci Code sold as well as it did. The conspiracy theory TV series The X Files ran for years. We live in a day and age when people tend to distrust authority, and so the claim that the truth about Jesus was covered up is a sure seller.

Thirdly, most people today, even Christians, are woefully ignorant about the Bible. A poll showed that the best-known Bible verse among modern American is “God helps those who help themselves” – which is not in the Bible at all. Thus people can make the wildest and silliest claims about these documents, and people still believe them.

One of the problems is with the language used of them. What we understand by a Gospel is a narrative like that in our Canonical gospels. The so-called “Lost gospels” contain nothing of the sort. Instead they are usually collections of sayings attributed to Jesus. My advice to anyone who is worried about the lost gospels is that they should read one or two of them. I have read all of the most popular ones myself. You will soon see that they are a radically different sort of literature from the canonical gospels. Another name they are known by is the “Gnostic gospels”. This refers to the fact that they are the product of a varied movement known as Gnosticism that flourished from the 2nd century and into the 4th century. The name comes from a Greek word meaning “to know”. To the Gnostics salvation was a matter of having esoteric knowledge – and that is what these Gnostic texts teach. Secondly, the “Lost Gospels” are all very late documents. None dates from before about AD 150, while our Gospels, particularly Matthew, Mark and Luke, can all be dated with confidence to before AD 70. Matthew and John were written by people who knew Jesus. There is an old tradition that Mark’s Gospel is based on the preaching of the Apostle Peter, and Luke explicitly states that he interviewed eye-witnesses. In contrast the Gnostic gospels were not written until more than a century after Jesus’ death, and have no connection at all with the eye-witnesses. No Christian group ever accepted any of them, for their teaching utterly contradicts the canonical Gospels. The Jesus of the Gnostic gospels came to give deep teaching, the true Jesus came to die for our sins. The Gnostic Jesus would never have been crucified.
Posted by Highland Host at 10:37 AM 6 comments: