A Plea for Discernment (2)

In the previous post I called for us to make the main thing the main thing, and not to go off on side issues, let alone our own hobby-horses. The trouble with our hobby-horses is that all too often they are not the issue at all - as witness the case I referred to in the last post, of the radio presenter who used the film The Golden Compass as a jumping-off point for a discussion of the influence of the occult on children's literature, when the central message of the book on which the film was based is in fact atheistic. I drew the conclusion from the programme that the presenter came with her own ideas, rather than letting the film actually dictate the programme content - which is a serious problem when one is supposed to be discussing the film!

Of a rather similar nature, in my opinion, was the attitude of Ian Paisley towards Donald Soper when Soper visited Northern Ireland. Soper was a theological modernist and arch-liberal, yet Paisley decided to criticise Soper for wearing a cassock, a garment he associated with Rome. Now, whatever one thinks of cassocks, one should agree that what Soper was wearing was of far less important than what he was saying! We have to make sure, when we criticize someone, that we keep our sense of perspective - what a man says about the atonement is far more important than what he may wear while saying it! Once more, whether the present Archbishop of Canterbury is or is not a member of the Gorsedd of Bards is not one half as important as his declared and public theology.

And, while I'm on the subject, about the celebration of Christmas. I have no problem with our brothers who refuse to celebrate it. Just, please, don't call me 'pagan' for it. After all, there is nothing pagan in getting up early and going to the chapel to proclaim that God has given his Son as a saviour for the world. Nor is there anything pagan in going there. We shall not be making sacrifices to Osiris, or anything of that sort.
Posted by Highland Host at 2:24 PM No comments:

Email ThisBlogThis!Share to TwitterShare to FacebookShare to Pinterest
Labels: discernment

A Plea for Discernment

With the first part of the adaptation of the last Harry Potter book hitting the big screen, the Christian media (and particularly the fundamentalist portion) is full of claims that this is encouraging the occult. Now, this is not a defence of Harry Potter, or a condemnation. It is a plea for us to get beyond simplistically attacking the mere fact that the books and fils use the imagery of magic and witchcraft, and to address what is behind these trappings.

A few years ago I was treated to one of the worst, most superficial Christian responses to a film that I have ever heard (naming no names). It was supposed to be a response to the film The Golden Compass (remember that?). Now The Golden Compass was an adaptation of the first book in Philip Pullman's His Dark Materials trilogy. While using the genre of fantasy, complete with magic and witches, Pullman's books are in fact designed to teach atheism, and he is quite explicit about this. Yet this review treated the film as though it was occult propaganda. It seemed that the reviewer was unable to get beyond the trappings of the novel to its core message. I was deeply embarrassed by the review, and I have to say that I have never listened to the podcast in question since. Why? Because the review was utterly superficial, and there are more substantial things one could listen to. There was the problem, you see. Now it seems to me that to say of the Harry Potter stories, "The involve people who do magic, therefore they are bad" is on the same level. It simply fails to engage with the stories at all. Now you may say, "Christians ought not to engage with worldly entertainment", but if you do, then that is reason enough not to engage with Harry Potter without invoking a superficial argument about witchcraft. If you are going to try to say that it is all right for Christians to watch secular films and read fiction, but that they ought not to have anything to do with Harry Potter, then you need to actually offer substantive reasons.

The books and films do not encourage children to participate in the Occult, for in Harry Potter's world magic is something you are born with. The divide between the magical and the non-magical is absolute and unbreakable. Harry Potter has magic powers because he was born with them, just as Clark Kent has the powers of Superman because he was born a native of the planet Krypton. No character in the Harry Potter books acquires magic powers, they possess them by virture of their birth. Thus J.K. Rowling has actually done all she can to depict magic as non-transferrable. Secondly the magic in the books works 'mechanically', without the invocation of spirit-beings. Magic is not a religion in Harry Potter, it is a super-power, like Superman's X-ray vision, but with the trappings of English folklore. Unlike Spider-Man's Peter Parker, Harry Potter did not get his powers in an accident. Nor did he gain them by his own ability. He got them from his parents, like Superman. Thus, at least in J.K. Rowling's mind, the world of Hogwarts is necessarily separate from the world of her readers.

For this reason I am unconvinced by the argument that Harry Potter encourages dabbling in the occult. There are shows and films that do that, as well as books. So a critique of Harry Potter must go behind the stylized, fantasy magic and address the actual messages of the books. That I do not intend to do - merely to challenge Christians to think about content, and look beyond trappings. Otherwise we shall make ourselves look foolish, and may even find that we are ourselves doing the right thing for the wrong reason - and in such a way as to fail utterly to make the case for others doing the right thing, as in the case of The Golden Compass. And by the way "It's just not my sort of thing" is a thoroughly good reason for not doing something!
Posted by Highland Host at 9:39 PM No comments:

In Many Bookshops with Pastor Charmley: Eleos Christian Books, Welshpool 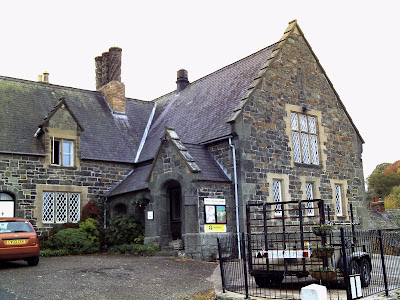 Welshpool is an attractive little markey town in North Wales. Close by is Powis Castle. Like many small Welsh towns, it has a main shopping street, with various streets off it. It is also the home of Eleos Bookshop.

The shop is associated with the Kingswood Church, an old-fashioned Pentecostal Church (so I am told), and located above the Church meeting-room in what must be a former Church school that belonged to the Church of England. It is a welcoming, attractive bookshop, well-ordered and well-laid out. The staff are helpful, which is always a good thing. But best of all, the stock is good, and there are a lot of books in stock that are worth buying. It was a pleasant surprise to find Eleos in Welshpool, as Christian bookshops are becoming rare today, following the closure of many former Wesley Owen and SPCK stores. This one is very good indeed. While specialising in new books, there is a reasonable seletion of used books in stock too. This is another bookshop that is to be recommended.
Posted by Highland Host at 6:44 PM No comments:

In Many Bookshops with Pastor Charmley - Buxton Christian Bookshop 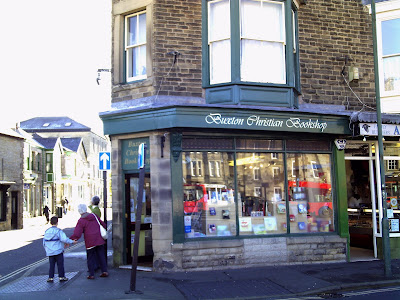 The picturesque spa town of Buxton in Derbyshire is not to be confused with its smaller namesake in Norfolk (where I received a part of my education). Buxton (Derbyshire) is divided roughly into two parts, the lower town and the upper town. The lower town contains the main shopping centre and the spa. The upper town is centred on the old marketplace, where one may find Buxton Christian Bookshop - as pictured here.

This small shop contains two rooms, a new books, music and media section in the front, which is so-so, and contains the sort of stuff one expects to find in a Christian bookshop these days, and a Secondhand room in the back. It is this which makes a trip to Buxton Christian Bookshop worthwhile, because this room contains a veritable treasure-trove of old books of all sorts, where one may freely browse. In addition I found the staff extremely helpful. This is a nice little shop, and ought to be well-used. In addition there is a huge secondhand bookshop in Buxton, and a little way out of the town there is a similarly vast remaindered book store that has some great bargains in it. So go to Buxton - it looks nice, and it has bookshops!
Posted by Highland Host at 9:36 PM 1 comment: