I have just finished listening to Chris Rosebrough's conversation with Joseph Atwill, not an easy thing to do given Atwill's stream of logical fallacies. His final argument is one that I took particular notice of, not because it was any good, but because it is such a wonderful example of a logical fallacy. The argument was basically, "look at the parallels between Josephus' account of his three crucified friends and the Gospel accounts of the crucifixion of Christ." 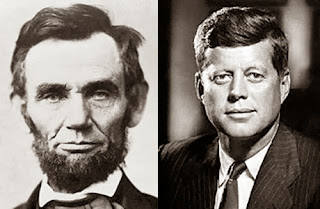 It happens that tomorrow is the 50th anniversary of the assassination of President John F. Kennedy, and that reminds me that there are startling similarities between the assassinations of Presidents Lincoln and Kennedy. John F. Kennedy was elected to Congress in 1946, Abraham Lincoln was elected to Congress in 1846, Lincoln was elected President in 1860, Kennedy was elected President in 1960. Both men were shot on a Friday, both men were shot in the head. Both Lincoln and Kennedy were succeeded by Southerners called Johnson. Andrew Johnson was born in 1808, Lyndon B. Johnson was born in 1908. These are far more compelling parallels than those between the Josephus account and the Gospel crucifixion accounts, which basically come down to "both feature three blokes getting crucified, and one of them lives afterwards while the other two die." Now I have checked, and all of these are facts.

Other parallels between Lincoln and Kennedy have been made, often becoming more and more strained as one or other President's history is shoehorned into the other's to make the parallelism more complete, e.g. "Booth shot the President in a theatre and fled to a warehouse, Oswald shot the President in a warehouse and fled to a theatre", this fails because equivocation is required on a number of words, yes Oswald was in a warehouse when he shot Kennedy, but he did the shooting with a rifle at long range, while Booth shot Lincoln at close range with a pistol while both men were in the theatre. Lincoln was shot in a theatre of the type where they put on plays, Oswald fled to a movie theatre. But even the genuine parallels are completely without meaning, merely interesting coincidences. Some are less surprising than they appear, for example a man first elected to Congress a century after another is, if he is later elected President, very likely to be elected President about a century after the other fellow. there are only seven days in the week, so the probability of a President being assassinated on a Friday is one in seven, and perhaps given that Sunday was a day of rest the true probability is closer to one in six. Johnson is a very common name. Then a sitting man is more likely to be shot in the head than anywhere else by a man trying to kill him - it's the most obvious lethal target.

Of course the list above is a list of similarities, carefully chosen for that reason, and therefore it would be erroneous to base any argument whatsoever on the list. It would be especially foolish to base an argument on any sort of probability of such a chain of coincidences having happened, irrespective of eyewitness testimony. But that's what Atwill does with the New Testament and Josephus. Any list of parallels may be factually interesting, but is probably factually meaningless. To attempt to subject the whole to a sort of statistical analysis and present the resulting analysis as something meaningful is quite simply an abuse of mathematics, for maths was never intended to be a tool through which we analyse history, discarding what we find mathematically incredible.