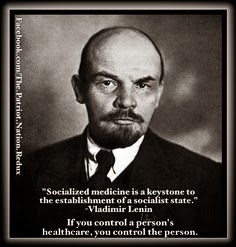 We've all seen them, those quotes used to clinch an argument. Like the one seen here. Seems damning, doesn't it? Except Lenin never said it, and in fact it dates from the late 1940s, long after Lenin's death, and was fabricated to support a campaign to defeat President Harry S. Truman's plans for National Health Insurance. A little thought about the issue of course suggests that it has to be a fake - Lenin was a  revolutionary, not an advocate of slow and concealed change.

A fake quotation like this one is obviously important; it links one's opponent with a historic "baddie", creating a guilt by association argument where there is in fact no association. But what about those "positive" quotations such as that attributed to Thomas Jefferson, ‘A government big enough to give you everything you want is also big enough to take it away'. In these cases the point being made is not that the other fellow sounds like Lenin (and therefore is, by implication, trying to bring in Communism by stealth), but that your position is that of some great figure from your nation's history. And after all, if a sentiment is true, isn't it true no matter who said it?

Well, yes it is, but that's not why these fake quotations are used, and it's certainly not why they were manufactured in the first place; they were manufactured, for the most part, to add a spurious authority to an argument, rather than letting it succeed on its own merits. It is in fact a form of the argument from false authority; in this case it is not that (as is usually the case) the alleged authority is not an authority at all, but that the authority appealed to never said what they are alleged to have said. An argument being made by Joe Bloggs may well be ignored, an argument alleged to have been made by Winston S. Churchill is more likely to be listened to.

While there are spurious quotations being manufactured all the time, many of those circulating on the internet are, like the fake Lenin quote, over fifty years old. Those using them may be guilty of bad research, but usually they are guilty merely of believing a source that is otherwise trustworthy but made the mistake of not going back to a primary source for a quote; but how many of us actually do go back to the primary source every time we want to use a quote? I recall when at seminary asking a visiting preacher at the Church I attended for the original source of a Thomas Goodwin quote, and he sheepishly admitting that he got it secondhand - ah, the perils of visiting preachers in churches with theological students in the congregation!

So why does it matter? Well, it matters because quoting a past figure is ultimately an appeal to history, and an appeal to a false quotation is therefore an appeal to a false history, often a legendary history, history become myth, as it were. Now the word "myth" is often used as if it were synonymous with "fiction", but that is quite unfair to the language; myth is not just made-up story, often it is an elaboration of real events, or at least has a basis in reality, however tenuous, but central to myth is the concept of meaning. A myth is a meaningful story, and the meaning matters more than the story. The myths of King Arthur help to establish a national identity, the myths of Robin Hood tell us that there is always hope, the prospect a hero rising up to help those who are oppressed. And the false quotations are part of myth; they give us our champions on the one side, the great figures of history who stood where we stand, and who still stand somehow behind us, and the great villains who were overcome in the past but whose descendants must still be fought. One of the clearest cases of this turning of history into myth is the quotation frequently attributed to Martin Luther, “If I profess, with the loudest voice and the clearest exposition, every portion of the truth of God except precisely that little point which the world and the devil are at that moment attacking, I am not confessing Christ, however boldly I may be professing Christianity. Where the battle rages the loyalty of the soldier is proved; and to be steady on all the battle-field besides is mere flight and disgrace to him if he flinches at that one point.” This is in fact not Luther at all, but a Victorian author, Elizabeth Rundle Charles, in a historical novel about the German Reformation, where the words are spoken by a fictional character. Fiction and history blur into myth, and Mrs. Charles' writing is mistaken for Martin Luther - a tribute to her writing skills if nothing else. And Christians encourage each other to be bold by quoting words they think were penned by Luther in the midst of conflict but were in fact written by a Victorian lady in her comfortable study writing a serial story for a magazine.

But the greatest danger of all this is when myth and reality are confused, and myth is treated as history rather than myth. It becomes all the more dangerous when the myth is confused with history and the confusion leads to a call to return to a mythological golden age that never actually existed. The Christian is never to call to a return to a previous era in history, but to press forward; the myth of the golden age is pagan, it is not something the Bible ever engages in; the Bible ends not with Eden restored, but with something much greater and more wonderful than that; God not just visiting humanity in a garden, but God dwelling with humanity in a garden city. That does not mean we should not resist those trying to move the ancient landmarks, but that we do so not in the name of a golden age past, but in the name of God who is alive, and the same for ever more.

So make sure that quotation is real. Accept only primary sources!
Posted by Highland Host at 5:52 PM 1 comment: