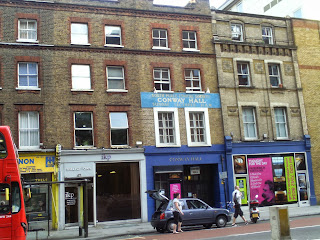 I have deliberately given no free publicity to the 'Covert Messiah' non-event that happened in London's Secularist cathedral, Conway Hall (our picture is the back door, and does not do justice to the building, but is the only one I have on file), on Saturday, quite simply because the "evidence" presented was nothing more than an alleged code "discovered" in a correspondence between the writings of Josephus and the Gospels, a code that, like Lowell's "canals on Mars", exists solely in the eyes of the beholder. But what interested me, particularly as I had been reading The United States of Paranoia recently, was the use of the language of the Conspiracy Theory.


Again and again in the 'Covert Messiah' promotional material, we hear comments about "government control" and state conspiracies. This is no accident, it is the deliberate us of such language to appeal to the zeitgeist (no pun intended). Distrust of governments and police is high on both the left and the right, and the appeal of conspiracy theories in the west is undeniable. It is of course simply a fact that governments have in recent times conspired in a variety of ways to exercise control over what they deemed "undesirable" groups; there is no denying this. During World War II, for example, the British Intelligent agency MI5 secretly took control of the entire German intelligence network in the UK and used it to systematically feed false information to German military intelligence. In a less obviously benign example, the FBI used moles within organisations deemed to be "un-American" to disrupt the groups. Thus the idea of the Roman Emperors creating a fake religion to control the Jewish people is appealing to those with little knowledge of history and minds receptive to conspiratorial thinking, something that describes a large proportion of the Western population.

Conspiracy sells. The X-Files sold for that reason, The da Vinci Code sold at the bookstores (but not so much at the cinema), and an alarmingly large number of people believe that Barack Obama is a Kenyan-born Muslim plotting to make himself dictator of the United States (though admittedly any number of people believing that is alarming). Even holocaust denial sells. And in Christian circles, The Two Babylons sells, despite being not only arrant nonsense, but antiquated arrant nonsense at that. Which brings us to another point; conspiracies sell on left and right, though of course rarely the same conspiracies. Despite the best efforts of certain left-wingers to depict right-wingers as conspiracy nuts and themselves as the rational types, in fact belief in conspiracy theories is at least as common on the political left as the political right. For every right-wing conspiracy theory about Barack Obama, I can give you a leftist one about George W. Bush, and in many cases the same theory about Bush.

Of course conspiracies happen, and to suppose that governments are always above-board and honest with their people is naive. But at the same time we should always try the claims, not accept them because they happen to agree with out own particular political ideology, religious belief or our worldview. In particular we ought to be suspicious of claims of grand conspiracies, for such claims are usually disguised attacks against a disliked party that the claim's originator wishes to destroy. The claim that Barack Obama is seeking to enslave the US populace is far too similar to the claim eight years ago that George W. Bush was claiming to enslave the US populace for me NOT to think that the motivation is not so much evidence of Obama's evil plan as a simple dislike of the man's politics, and the claim that the Flavians created Christianity to control the Jews is far too similar to Jack Chick's claims that the Vatican created Islam to control the Arabs for me NOT to think that the motivation is in reality a mere dislike of Christianity. In all these cases the common element is a fear of the party at the centre of the conspiracy is going to destroy "our America", and since the normal methods have failed, extraordinary methods must be adopted against the foe. The danger of this train of thought should be instantly apparent.

The accusation of the vast conspiracy takes the place of actually engaging with the other side; it seeks to imitate the act of Alexander the Great with the Gordian Knot, rather than untying, it tries to cut. By painting Christianity (or Islam in the case of Jack Chick) as the deliberate fabrication of a cynical conspiracy, it says in effect, "I do not need to address the claims of the other, for the other is merely deceived by an ancient plot of which they are ignorant, but I know the truth". Convenient, but a dodge at best. The Conspiracy is a pseudo-history that takes the place of the actual history, and justifies unthinking hostility in the place of serious intellectual engagement. At worst it places the other in the position of a delusional mental patient who needs to be restrained for his own good, justifying in the mind of the one holding it the most oppressive measures.

What therefore we need to do is to challenge the conspiratorial mindset. Not the idea that there are such things as conspiracies (there are such things, and governments do engage in them), but rather the mindset that regards government conspiracy as the first port of call when there is a school shooting or a terrorist attack, as the default explanation, so to speak, for all troubling events (for example, when the Boston Marathon was bombed there were websites that declared it to be a "false flag attack" even before a "flag" was announced). And more than that, we must challenge the conspiracy narrative that looks to a grand conspiracy as the cause of these events, whether that grand conspiracy is the Roman Catholic Church, the Freemasons, the Illuminati, or the Knights Templar (and the Knights Templar are always involved somewhere in these things). Instead we must teach history, study history, respect history, and treat the grand conspiracy as pseudo-history. Why? Most notably because the Grand Conspiracy is historically unprovable, there is no evidence for it. And its advocates reply that if it existed we should expect to find no evidence. At which point my scientific side comes in and points out that a hypothesis that is unfalsifiable is to be regarded as false. Or in more historical terms, if all evidence against a theory is to be regarded as evidence for a theory, then the theory has become a presupposition, an axiom, and as such has passed from the realm of history to the realm of metaphysics. The conspiracy has become, to all intents and purposes, an article of faith. And that's not a good idea. For it makes those who claim to be sceptics entirely unsceptical of their own conspiracy theory.
Posted by Highland Host at 11:45 PM No comments: