In Many Bookshops with Mr. Charmley: The CTS bookshop, 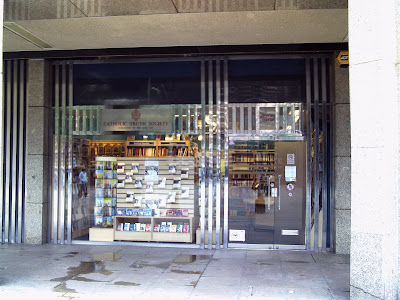 The occasional series In Many Bookshops with Mr Charmley continues with the Catholic Truth Society Bookshop at Westminster Cathedral. I know what you're thinking: Have I gone over to Rome? No, I haven't, but somethimes the best way to find out what Rome teaches is to read Rome's books. And this is one of the best places in Britain to get them. What I really appreciated about this shop is that it is a bookshop. Not a shop for nick-nacks and ornaments, a bookshop, for books. Look at that picture. It's full of books. Not the latest paperbacks either, but serious books. There's shelves and shelves of the Church Fathers in the back for those interested in Patristic studies, loads of books by past Roman catholic writers, including Chesterton and Newman. Books of lasting value.
I am not a Roman Catholic, I probably disagree with most of the books sold here. But I agree with the philosophy that seems to guide this place - sell good books of lasting value. I would recommend this shop to anyone trying to get hold of Catholic and Patristic material - though be aware that a lot of the material is a bit pricey! I have never seen so many books by the Church Fathers in one bookshop before, and the effect is quite stunning. Of course, the Fathers were not modern-Day Roman Catholics, and we can learn a lot from them as Protestants. It's just you sometimes have to go into the CTS to get the books!
The CTS support the campaign to make John Henry Newman a Saint, something I quite understand English Catholics wanting. He was probably the best English Catholic writer of the last century and a half! He's certainly the most influential 19th century English Roman Catholic theologian. He was also a master of the English language. If I live that long, I expect to see St. John Henry Newman on the official list of Roman Catholic Saints within the next five years.
When I was there the shop was quite quiet. I like that, of course. It adds to the feel of a serious bookshop - which is what this is. The Cardiff CTS shop is another matter, but there you go, that's for another time! My final verdict on the London CTS bookshop is this: a serious Roman Catholic bookshop where you can be fairly sure to find what you want as long as it's either Roman Catholic or Patristic. For what it is, it's very good.
Coming up, God willing: The Methodist Book Centre and the Bible Bookshop, Stoke-on-Trent. Or: I go to meet the neighbours.
Posted by Highland Host at 2:23 PM