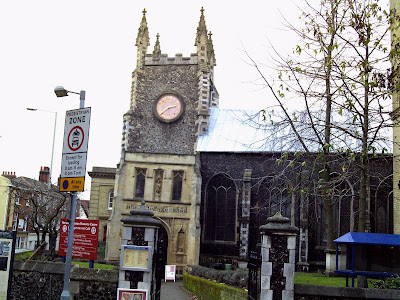 The city of Norwich is well-supplied with bookshops, but not Christian bookshops. There is in fact only one Christian bookshop in Norwich, the Ecumenical Norwich Christian Resource Centre. Here one may find anything from John Stott to Bishop Spong, from candles to CDs. Since the shop is ecumenical, it caters to all tastes and none, but what can you do? There simply isn't anywhere else in Norwich where you can find Christian books routinely on the shelves. The staff are friendly and helpful, and will order in books if asked.

The Norwich Christian Resource Centre is located in the old church of St. Michael-at-Plea, and the building still retains some ecclesiastical fittings, including the chancel screen, the font, and paintings of Moses and Aaron either side of the tower arch. The chancel now houses the Forget-Me-Not Cafe, which is named for the inscription on the old church clock. 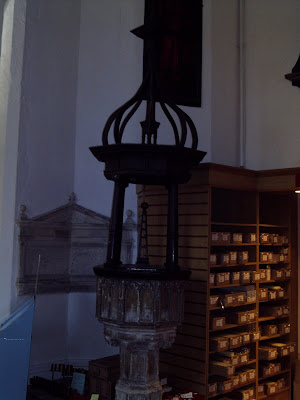 Really St. Michael's was a good choice for a church to turn into a bookshop, if one had to be. It actually has a literary connection of its own. For within these walls, at the very font shown here, the 19th century religious writer Dr. John Stoughton was baptised according to the rites of the Church of England. He probably never came in here again, as his father disliked the vicar and went to the Methodists, and his mother was a Quaker. Stoughton himself became a Congregational minister, and was a member at the Congregational chapel located directly behind the church as seen in the photograph above. His maternal grandfather was the Master of the Bethel Hospital for the insane, and died as the tragic result of someone thinking that one of the inmates could be trusted with a scythe to cut the lawn.
Posted by Highland Host at 8:23 AM